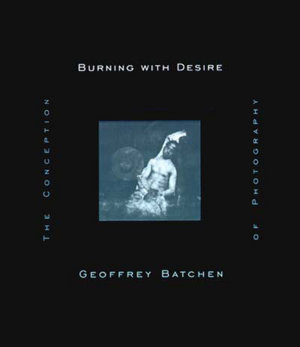 In an 1828 letter to his partner, Nicéphore Niépce, Louis Daguerre wrote, "I am burning with desire to see your experiments from nature." In this book, Geoffrey Batchen analyzes the desire to photograph as it emerged within the philosophical and scientific milieus that preceded the actual invention of photography. Recent accounts of photography's identity tend to divide between the postmodern view that all identity is determined by context and a formalist effort to define the fundamental characteristics of photography as a medium. Batchen critiques both approaches by way of a detailed discussion of photography's conception in the late eighteenth and early nineteenth centuries. He examines the output of the various nominees for "first photographer," then incorporates this information into a mode of historical criticism informed by the work of Michel Foucault and Jacques Derrida. The result is a way of thinking about photography that persuasively accords with the medium's undeniable conceptual, political, and historical complexity.

Authors: Geoffrey Batchen
Categories: Photography
In an 1828 letter to his partner, Nicéphore Niépce, Louis Daguerre wrote, "I am burning with desire to see your experiments from nature." In this book, Geoffr

Authors: Jillian Lerner
Categories: Art
This book explores a range of experimental self-portraits made in France between 1840 and 1870, including remarkable images by Hippolyte Bayard, Nadar, Duchenne

Authors: Brett Ashley Kaplan
Categories: History
How do the spaces of the past stay with us through representations—whether literary or photographic? How has the Holocaust registered in our increasingly glob

The Philosophy of Desire in the Buddhist Pali Canon

Authors: David Webster
Categories: Religion
David Webster explores the notion of desire as found in the Buddhist Pali Canon. Beginning by addressing the idea of a 'paradox of desire', whereby we must desi

Photography and Its Origins

Authors: Tanya Sheehan
Categories: Photography
Recent decades have seen a flourishing interest in and speculation about the origins of photography. Spurred by rediscoveries of ‘first’ photographs and pro